There is no other news site read on a daily basis that has less to do with reality than BuzzFeed. I do not think it is any secret that very few of us actually care about “The 10 Outfits Your Cat Looks Best In,” or the “42 Nutella Recipes Crazier Than Your Crazy BFF.” Their site is content driven, yet lacks relevant content. BuzzFeed has simply prospered off of the golden age of click-bait, making a ton of money while contributing absolutely nothing to society. I don’t want to say that I hate BuzzFeed, or that BuzzFeed sucks, but it is what it is: BuzzFeed click-bait.

Their articles, quizzes, and general content are all irrelevant, makes its readers less intelligent, and, if I come across one more pointless quiz, featuring which cartoon dog you are like the most, on my timeline I may have to log off of social media for good, never to be seen or heard from again. Sorry, Aunt Jennifer.

On Monday, November 28, I came across an article written by Michelle No of the BuzzFeed Staff. The article caught my eye as it was entitled 15 Hipster Food Trends That Need To Die in 2017. As a consumer advocate, food is a big part of my daily life – I track what people are eating now, what they want to eat next, and all of the trends in between.

On their list were items like the newly coveted Sushi Burrito, Cauliflower Pizza, and even Microbreweries. As a reporter, and a person who does in fact eat food, I was struck by this article as most of the items they list I have both tried and enjoyed. Then, however, it hit me that I couldn’t be alone on this, so I took to the internet to see how others felt about these delicacies.

I was obliged to see that I was correct. All items on BuzzFeed’s list were still loved by many, along with having numerous articles written about their sweeping of our food nation.

Publications such as First We Feast, Bon Appetit, Grub Street and even…BuzzFeed? Got in on the action. That is not a typo. BuzzFeed. Our favorite social news website had written articles absolutely raving about 13 out of the 15 of these foods in the recent past. And this is EXACTLY what keeps me up at night.

How can any credible journalist completely redact ideas, statements, and articles that their publication had written about just months before? It pains me to continue on and address this situation, but for your sake, I must.

First on BuzzFeed’s list is the sushi burrito. Stating that “it’s just a little too much raw fish in one bite.” Um, yeah, I’d have to wholeheartedly disagree.

What an incredible idea. Taking two of my largest food groups and putting them together into one seaweed wrapped bundle is exactly what I need more often than not. BuzzFeed, though, seemed to agree with me as well just a few months ago as they made headlines boasting about “The Sushi-Burrito Mash-Up You Need To Eat Immediately.” 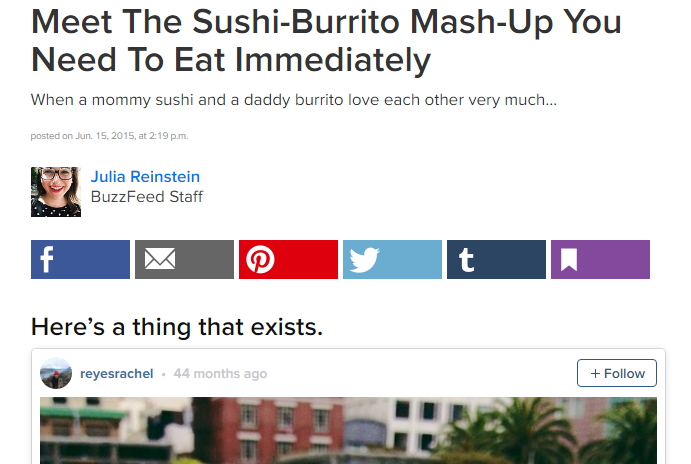 Second on the list is the rainbow bagel. Now, I was a skeptic from the beginning, knowing that it was just food coloring and must be more aesthetically pleasing than a culinary breakthrough.

Like that really matters, though? A bagel is a bagel and will be fantastic on any occasion, no matter its color. Turning it into a rainbow masterpiece, however? Have at it! Why not start your day with a miracle? Add funfetti creamcheese and continue smiling until your sushi burrito at lunch – don’t listen to the folks at BuzzFeed giving this hilariously delicious creation the short end of the stick. Or… listen to the same folks at BuzzFeed freaking out over the bagels’ pretty colors just a few months ago.

Here’s another thing that exists. (Extremely clever and fresh Julia Reinstein. That’s 2 of the same taglines in a row, for those keeping count. Go ahead, scroll up and look at the first picture.)

Apparently BuzzFeed is too cool for the zucchini pasta (or, simply, zoodles) craze as well. A nutritious, low carb, low calorie replacement for people who still want to eat pasta is even on the chopping block in BuzzFeed’s article! But wait, how is that even possible when on March 27, 2015, the publication gave their readers “10 Delicious Zucchini Noodle Recipes That Will Make You a Believer.” I’m a believer, by the way.

Sticking with the low-carb substitute, number 4 on BuzzFeed’s list of “foods that need to die” was cauliflower pizza. I’ll admit, I’ve never had it; because, basically, I like pizza pizza. But I have seen pictures and heard from very close friends who I’d trust with my life, let alone dinner, that it is incredible. Even if it absolutely disgusting, though, who is BuzzFeed to tell me I can’t eat my favorite white-broccoli-type vegetable in pizza form? Oh, wait, never mind. BuzzFeed actually gave me a recipe to make delicious cauliflower pizza, along with “23 Insanely Clever Ways To Cook With Cauliflower Instead of Carbs”. Thanks, guys! 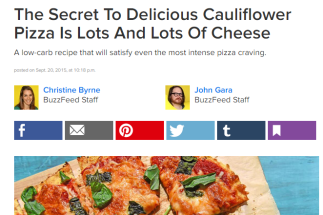 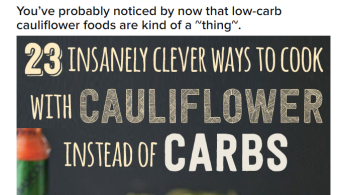 It does not end there, but for the sake of your time and my sanity I will speed things up and end with, possibly, my three favorite on the list: “Fancy Chocolate,” jarred salads, and milkshakes.

BuzzFeed lists Fancy Chocolate Bars at number 12 on their list of foods they wish to kill off in the coming year, and I have to say, I agree with this for the most part. Everybody loves chocolate, but not everybody has 40 dollars to spend on the decadent box of darks from the Belgian Chocolatier around the corner from their office. It’s a status thing, and quite frankly, it’s embarrassing. These big shots are all standing around the water cooler not chewing their 98% cocoa product, and here I am stuffing KitKats into my face and pretending to know the political issue they’re discussing. So here I was thanking BuzzFeed for doing their part to put an end to this chocolatey hierarchy, until, of course, I read their piece on “13 Amazingly Delicious Fancy Chocolates To Try” and punched square through my computer monitor.

Moving on to milkshakes, and other “overloaded desserts,” that I’m sure everybody just hates. I mean, they do look disgusting.

Don’t those look awful? BuzzFeed lists them as a food they wish death upon, but also decided to do a massive write-up on these “heavenly jars of perfection” (their actual words!) last January, in their piece, “This NYC Restaurant Created The Most Insane Milkshakes You’ll Ever Eat.” Very subtle.

They did not stop there, though. The publication was also nice enough to take the time to write another article, leaving us with 6 recipes from said restaurant (Black Tap), in which we could re-create at home. Since, you know, we all hate these things so damn much.

After coming across “28 Incredible Meals You Can Make in a Mason Jar” and “18 Healthy Mason Jar Salads,” my daily lunch experiments were changed for the better. What a good idea, BuzzFeed! Spreading the word on convenient, nutritional delicacies to save us all time, money, and belly fat. I went ahead and tried many of these options, and they worked great. I’d highly recommend them to anybody looking for a quick, delicious lunch! Too bad BuzzFeed wants them all dead come 2017, as “Mason-Jarred Everything” swoops in as their final listing.

It’s absolutely astounding to me that a serious publication would continue to do this, time and time again. I understand that BuzzFeed is not the most prestigious news agency out there, but to so outwardly contradict the “reporting” you have done in the past is not only inadequate, second-rate journalism, it also points directly toward their click-bait scheme; following trends with an overly cringe-worthy headline, preying on your precious clicks.

I’m just about done for now, but I’m sure I’ll be back when rainbow bagels are back “in” again.

Did you enjoy this piece, or have a follow-up question for us? Did we miss a detail or something that irks you? Let us know! Send an email to Outreach@ConsiderTheConsumer.com, find us on Twitter or Facebook, or even connect with us directly on our website! We look forward to hearing from you all.

No thoughts on “13 Reasons Why I Hate BuzzFeed Click-Bait” yet. Be the first to speak your mind!

Has Amazon Made Whole Foods Better? In 2017, I wrote an article on Amazon’s acquisition of the Whole Foods Market, a popular organic food store chain. Initially, it was a promising prospect: healthy eating would be 43 percent cheaper than under the store’s previous ownership. Add to that the convenience of Amazon’s delivery meant that Read More

Learn More about the Hitman Scam Ever since the dawn of email, nefarious users the world over have attempted to utilize it to scam consumers out of their hard earned money. From Nigerian princes and stranded “family” members needing quick financial assistance, to someone threatening to release your browsing history to your mate or family Read More

Know Your Syrup, People! On pancakes, waffles, oatmeal and more, Americans love maple syrup. The rich flavor is one reason why it’s so popular, but it’s also been touted as a “natural” sweetener that’s better for you than regular old sugar. Not only is that not the case, but it’s also just one of a few big misconceptions people Read More